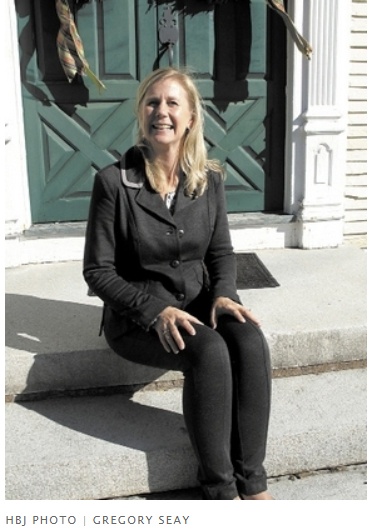 Cheryl Newton, 46, vividly recalls the time, just before 9/11, when designing high-end shoreline Connecticut houses had her on the partner track at the architectural firm where she worked. Married, she had a young, growing family. But something, Newton says, still wasn’t quite right.”I have a meaningful career. A devoted husband. Two beautiful children. But I didn’t understand why I was so unhappy,” she said.Newton long had plans to start her own design practice, so after taking some time to work part-time and focus on her young sons, she took the liberating step in 2010 — at the height of the Great Recession — to go into business for herself.Today, her eponymous Glastonbury firm, Cheryl Newton Architect LLC, has designed more than 120 residential, municipal and commercial projects, mostly in Connecticut.”I would never go back to work for someone else after running a business,” she said. “It’s too much fun.”Newton is among a growing number of U.S. women aged 40 and older who have chosen to plunge into entrepreneurism, say experts. Driven by a need for self-fulfillment, economic necessity, enabling technology, and backed by a rising network of financial, business and social support, females generally are opening businesses alongside younger Millennials at rates much faster than males, research and surveys show.That trend likely will continue, experts say, as women — and society in general — become more comfortable with the notion of women starting and running businesses.In the U.S., the number of women-owned enterprises rose 68 percent from 1997 to 2014, faster than the 47 percent climb in the number of businesses owned by all genders, according to a recent American Express OPEN (AEO) report.In Connecticut, there were an estimated 96,400 businesses owned by females – 33 percent more than in 1997, the report found. The number of workers they employ and annual revenues also grew in the period. Despite those gains, the Nutmeg State ranked 44th in creation of women-owned firms. North Dakota was first, followed in order by the District of Columbia, Nevada, Arizona and Georgia, the AEO report found.No specific data exists that breaks down women entrepreneurs by age. However, Connecticut women’s advocates and other observers in the financial and nonprofit sectors say there are enough mid-life anecdotes like architect Cheryl Newton to validate it.Patricia Lennon, a Danbury author, crowdfunding consultant, as well as a business coach and mentor to female entrepreneurs, says the culmination of several key forces or events hastened the trend of more women seeking later in life to follow their passions, dreams and goals into business.For one, Lennon said, the aging economic models of households where males are the primary breadwinners, and females tend to family and household affairs, or work part-time, don’t fit today’s reality. Women long ago began shedding their aprons to take up full-time jobs and careers outside the home, largely as more households needed two incomes to make ends meet.That altered social dynamic, in which women today account for 51 percent of the American population but are responsible for 90 percent of U.S. households’ purchasing decisions, was further put to the test after the 9/11 terrorism attacks, Lennon said. Many middle-age women today were just starting their households or pursuing their careers at the time of the attacks.Starting right after 9/11, and accelerating amid the Great Recession, she said, women “drew a line in the sand,” determined they would no longer cower to events outside the control of them and their male peers.”That shifting and clarification of values resulted,” Lennon said, “in women saying they would come back to the workplace.”But this time it would be on their terms, she said.Fran Pastore, CEO of Stamford-based Women’s Business Development Council (WBDC), said the desire and focus launching more women into business are the same traits they have always harnessed in marshalling their families, in educating others and caring for the ill, as well as in other professions.”It’s the one thing that women see as a logical and reachable goal, to control their financial destiny,” Pastore said.Women also bring other advantages to their ventures, she and Lennon said, such as diversity of thought, as well as a fresh perspective and approach to solving problems.Financing is still a major obstacle and women have a tougher time than men getting financing for their ventures, Pastore and others say. That pendulum, however, is starting to swing the other way. In late October, for example, WBDC announced creation of a micro-loan fund targeted at female-sponsored enterprises. Glastonbury’s United Bank immediately pledged $100,000 to seed the fund.

Basam E. “Bas” Nabulsi is a Stamford intellectual-property partner at law firm McCarter & English LLC and a WBDC board member. Nabulsi says he’s seen firsthand the growing number of women entrepreneurs coming to him as clients.”Many of these women have tremendous educations and may have been out of the workforce for a time,” he said.Another spark for the rise of women-owned firms, Nabulsi says, is the growing embrace among large businesses and corporations of “best practices” that engage women and other minority entrepreneurs as suppliers and contractors. On Oct. 1, Connecticut widened its minority-contractor inclusion protocol to municipalities that collect state dollars for infrastructure improvements and other contracts.Fueling the trend, too, are networking, mentoring and support groups and agencies like WBDC, the Service Corps of Retired Executives (SCORE), the Small Business Administration and state Department of Economic and Community Development, experts say.Newton has found her success through several of those.SCORE, she said, mentored her in even the minutest details as to how to manage her business.”One of the best things I did was I went to SCORE,” she said.WBDC lent moral and professional support, while Hartford’s microlending nonprofit, HEDCO Inc., guided her in getting a $50,000 loan through DECD, to buttress her $12,500 in savings. Newton says she also reached out to the University of Hartford’s Women’s Entrepreneurial Center and the Diversity Supplier Development Academy.In her first six years, Newton says she has completed more than 120 design projects. One, a redesign of a South Glastonbury home to incorporate solar power and sustainable insulating materials, recently was named a top 10 most energy-efficient home by the U.S. Green Building Council.She also has a three-year, “on-call” contract to provide design services to UConn.”My business plan is to have a balanced workload in commercial, residential and municipal,” Newton said. “I thought it would take five to 10 years to get that kind of work. But I’ve gotten it in one to three.”